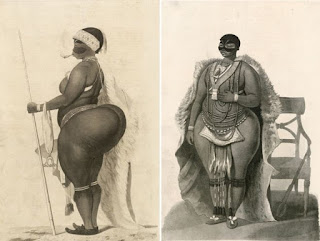 Until news of a possible film project about Saartjie Baartman’s life emerged recently, the Khoisan people of South Africa seemed content to let the portrayal of the Sans’ hilarious grasp with modernity in the 1980’s comedy hit: “The Gods Must Be Crazy” be the only reminder of their existence.

“Khoisan” is a unifying name for two closely linked Southern African peoples that share physical and putative linguistic characteristics. They are culturally distinguished as Sans or Bushmen (who are hunter-gatherers as portrayed in the above-named film) and the pastoral Khoikhoi (Baartman’s tribe). However, Saartjie Baartman’s life story is nowhere near as hilarious as Nǃxau ǂToma’s comedic folly in “The Gods Must Be Crazy.”

Born with extraordinarily large buttocks in 1789 in the Gamtoos Valley of South Africa, she was taken to London when she was barely in her 20s under false pretences. Although the British Empire had abolished the slave trade in 1807, slavery itself continued to thrive. Saartjie Baartman’s promoters, an enterprising Scottish doctor named Alexander Dunlop and a mixed-race entrepreneur, Hendrik Cesars, in whose household she worked, exploited her unusual physique through a series of freak shows. She was stage-named the “Hottentot Venus,” (with “hottentot” - now seen as derogatory - then being used in Dutch to describe the Khoikhoi and San, who together make up the peoples known as the Khoisan).

The Freak Show, a popular pastime in 19th century England, was an exhibition of biological rarities (referred to as “freaks of nature”), featuring physically unusual humans such as giants, dwarves, conjoined twins, and those with both male and female secondary sexual characteristics, etc. In that prevailing climate, Saartjie Baartman, with her steatopygia (an extreme accumulation of fat on the buttocks), was the quintessential freak show material.

According to a BBCreport, “On stage she wore skin-tight, flesh-colored clothing, as well as beads and feathers, and smoked a pipe. Wealthy customers could pay for private demonstrations in their homes, with their guests allowed to touch her.
Her arrival in England coincided with speculation over whether Lord Grenville and his coalition of Whigs - known as the “broad bottoms” because of Grenville’s own large behind - would try to seize government. This was a gift for cartoonists. One creation, entitled A Pair of Broad Bottoms, shows Grenville and Baartman standing back-to-back, with another figure measuring their respective posterior sizes.”

Sahistory.org noted that she was exhibited at a venue in London’s Piccadilly Circus. “Englishmen and women paid to see her naked body displayed in a cage that was about a meter and a half high.”

The treatment caught the attention of British abolitionists, who tried to rescue her because they considered her performance indecent, insisting that she was performing against her will. However, the case failed when it emerged in 1810 that Saartjie Baartman, although illiterate, had allegedly signed a contract with her promoters agreeing to travel to England to take part in shows, in the hope of gaining something—material or otherwise—from her performance.

In 1814, following Dunlop’s death and Cesars’ return to South Africa, Baartman came under the influence of a French ‘animal exhibitor,’ S. Reaux, who took her to France, where he exhibited her in a cage alongside baby rhinoceros, wearing only a loincloth, and amusing onlookers who frequented the Palais-Royal. She was said to have become a celebrity once again, drinking at the Cafe de Paris and attending society parties. During this period, she reportedly drank and smoked heavily and was believed to have also worked as a prostitute.

Furthermore, she allegedly agreed to be studied and painted by a group of scientists and artists, particularly Georges Cuvier, a professor of comparative anatomy at the Museum of Natural History, who subjected her to a series of examinations, but she refused to appear fully naked before them, arguing that this was beneath her dignity.

Some accounts maintain that freak shows lost their appeal in the post-Napoleonic France, and Baartman spent the last years of her life in poverty. She died in 1815 in Paris at the age of 26 of an undetermined inflammatory disease.
Georges Cuvier, who had danced with her at one of Reaux’s parties, according to a report, obtained her remains from the local police. Dissecting it, he made a plastic cast of her body, pickled her brain and genitals and placed them in a jar, which remained on display at the Museum of Man in Paris for more than a century and a half. But in 2002, following a request by the late South African president, Nelson Mandela, that the French government returned her remains for burial, Saartjie Baartman was finally laid to rest at Hankey in the Eastern Cape Province.

Early this year, when it emerged that American singer/actress, Beyoncé Knowles was scripting a film about Saartjie Baartman’s life in which she planned to play the leading character, Chief Jean Burgess of the First Indigenous Peoples of South Africa, was not pleased. “She (Beyoncé) lacks the basic human dignity to be worthy of writing Saartjie’s story, let alone playing the part,” the chief was quoted as saying.

It was not immediately clear what lay behind the outrage, especially as there was no indication that the chief had seen a draft of the script or given details of the project, so ‘misrepresentation of facts’ was ruled out as a reason. Also, as there was no indication that Beyoncé’s path and that of the Khoikhoi tribe have ever crossed, the possibility of the tribe having a beef with the singer/actress was equally dismissed as a reason for the outrage. Chief Jean Burgess reportedly said, “Ignoring the fact that the Khoikhoi is alive and that Saartjie’s story would have an impact on how we are portrayed is a mistake of great magnitude.”


Following these comments, some observers noted that historical shame was perhaps the reason behind the outrage. “Why Saartjie Baartman? Why not a story about an Indigenous American woman? I can only see arrogance in her attempt to tell a story that is not hers to tell,” the chief said further, insisting that consultation, respect, and acknowledging the existence of the Peoples were fundamental to the story.

Commenting on the event, Kobus Reichert, a Gamtkwa Khoisan Council member, said the tribe did not have a problem with the movie or Beyoncé Knowles acting in it as long as the community in the Eastern Cape, where Baartman was born, was not sidelined. The film, according to him, has to be done respectfully and with the right ‘cultural understanding’.
While Reichert’s position is considered rational, some in the industry insist that it is unfair for historical shame to stifle artistic freedom, explaining that, in any case, no cinematographic portrayal of that event could possibly be more demeaning than the reality of what Saartjie Baartman was subjected to.

Meanwhile, Beyoncé has reportedly denied that she was pursuing a movie project about the life of Saartjie Baartman (seen today by many as the epitome of colonial exploitation and racism, of the ridicule and commodification of black people). Her representative was however quoted as saying, “This is an important story that should be told.”

The chairman of the South African Guild of Actors, Jack Devnarain, responding to a question about the matter, said, “As a producer, you have the right to tell the stories of people you find fascinating and that’s what we must be careful not to object to. For me, the main concern is: are we doing justice to the person. Are we taking a careful and conscious look at what Saartjie Baartman’s story was all about and will that be served?” He added however, “I’m not particularly convinced that Beyoncé is that right actor for that particular role.”
Tweet
Posted by AuthorSuite Blog at Saturday, January 09, 2016 No comments: Links to this post