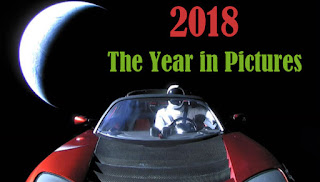 Is there a word that can sum up 2018 better than any other? Or rather, can a single word capture the nerve-racking, chaotic, electrifying, and mystifying events that characterized 2018? Perhaps no single word can properly reflect the 'soul' of this year and the heartbeats it spun. For, 2018, like nearly all the years before it, neither lived up to expectations nor utterly dashed hopes for the future.

In the span of 365 days, a royal wedding which delighted many (but further estranged the bride's family) took place in London; threats of a nuclear conflict vanished like a joke after a made-for-television meeting in Singapore between U.S. President Donald Trump and the North Korean leader, Kim Jong-Un.
In Europe and Brazil, political hotheads who were swept to power in a wave of untested populism are now faced with the staggering reality of governing. Between Asia and the Americas, whispers of a trade war between U.S. and China shook global markets. And a migrant caravan at the Mexican border got American political pundits and charlatans arguing right into the midterm elections.

In Helsinki, Finland, a high profile meeting between U.S. & Russian Presidents, deemed humiliating for America, set tongues wagging. A dissident journalist, Jamal Khashoggi was murdered inside the royal embassy of Saudi Arabia in Turkey, and in the messy aftermath, Mohammed bin Salman, the Saudi crown prince, lost his credibility.


In both the U.S. and the U.K., a record number of cabinet ministers resigned - the former because of the unruly style of governance in the White House and the latter because of disagreements over Prime Minister, Theresa May's controversial Brexit negotiations. In the U.S., mass shootings became a kind of new normal, and a looming government shutdown became an ugly reality in Washington D.C. Now, 2019 awaits its turn...
_____________________________________________


In the first month of the year, after a week of heartbreaking testimonies from his victims, a court in Eaton County, Michigan sentenced Dr. Lawrence Nassar, the former physician for the American gymnastics team to 175 years in prison for sex crimes.

By February the scene had changed to one of excitement following the Winter Games in Pyeongchang, South Korea which, though set against the backdrop of tensions with North Korea over its nuclear threats, riveted the world. February also marked the end of the Castro era in Cuba, when Raul Castro stepped aside as president, ending nearly six decades of Castro leadership on the island.

In Russia, Vladimir Putin won a fourth presidential term, and later in the year, successfully hosted the Soccer World Cup which the France national team won.

Not only did Italy missed the event, but it also had a major, unexpected tragedy to deal with when the Morandi Bridge in Genoa collapsed. Britain, on the other hand, had reason to celebrate in spite of the uncertainty of Brexit when Prince Harry married his American heartthrob, the Suit actress, Meghan Markle, at Windsor Castle.

In the U.S., the Republican Party, led by Donald Trump suffered a major setback in the November midterm elections. Though the GOP held onto the Senate, the Democratic Party, propelled by many women and minority candidates, took back control of the House of Representatives. And the contentious Supreme Court nomination hearing of Brett Kavanaugh, just before the midterm elections, further divided opinion in the U.S.A.

And as news broke that actor Kevin Spacey will be arraigned on January 7, 2019, in Nantucket District Court in Massachusetts on charges of indecent assault and battery, he released a video of himself in character as Frank Underwood from House of Cards.